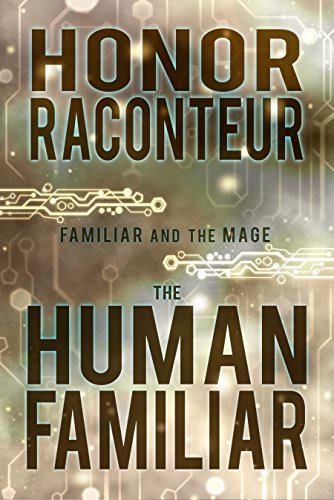 While Bannen had every intention of finding adventure, being yanked through a magical portal two continents away isn’t quite what he imagined happening. For that matter, being magically bound to a mage-in-training hadn’t ever crossed his mind.

Being the first human familiar ever summoned in Corcoran? Not on his to-do list.

Rena certainly needs all of the help that she can get, as her magic is very different, inhibiting her of the normal shields and protections. Everyone says her summoning a human familiar is a mistake, that she needs to break the bond and send Bannen back.

But Bannen doesn’t like this idea, not one iota. Renata Rocci has the magic of a Grim Reaper, the heart of a lion, and a body too frail to keep up with either. She can face assassins; meddlesome mages; politicians; and legendary, nightmarish monsters without flinching. Without losing and that’s sexy as sin.

This is definitely not the adventure he signed up for.

In this first chapter, we get a glimpse of Bannen Hach/Hach Xiang Liang in his home country, about to become a stowaway on a boat as he strikes out on an adventure. And he most certainly gets that adventure! …Just a little more than he bargained for. He is magically summoned 2 continents away in order to become bound to the Mage Renata and serve as her familiar. Already, we can see that Bannen has a thing with being protective (perhaps even overly so) of women… It is going to be interesting to see how this plays along with his role as familiar! Seems like it would fit him nicely.

I am already extremely intrigued to learn more about Bannen’s, as well as Renata’s character, and see how their relationship turns out. It seems like they would get along well, so here’s to hoping they do! I am also incredibly interested in why Renata’s spell went wrong and summoned her a human, rather than the more common animal… Perhaps she needed a human? Guess I’ll find out soon! I am excited to keep reading!

I CAN’T GUSH ABOUT THIS BOOK ENOUGH!!! okay, first things first: the overview. Basically, this story is about a 19-year-old boy (sorry, MAN) who is summoned by a 16-year old girl/apprentice mage to have as her familiar. It just so happens that mages are not allowed to have humans as their familiars–slavery and all that jazz–and so Renata (aka Rena) and Bannen are forced to await a decision by the Mage Council about what to do with their familiar bond. In the meantime, Bannen acts as her stand-in familiar, following her on jobs, her training, and learning all about this girl and unfamiliar country (because, by the way, he was summoned from 2 continents over). As they spend more and more time together, their familiar bond strengthens as does their friendship. Bannen also becomes privy to just how strange Rena is in the magical world, as her magic has a tendency to deconstruct, whereas all other magic constructs. To top it all off, Rena is afflicted with a mysterious illness that neither magic nor science has any explanation for, let alone any hope for a cure. Do Bannen and Rena get to keep their familiar bond intact? Do they both even want to keep it?

“My uncle always said, when a man sets off for an adventure, he can’t complain if it takes him strange directions.” (Loc 222)

Sprinkled with modern slang and a dash of technology, reading this story was slightly jarring at first. I was unsure as to what time period it was set it, because it gave off a pretty medieval vibe… Excepting for terms such as “sexy” and the like that Bannen enjoys throwing around. There is also some technology, such as Trolleys in the city and a train… I am unsure if these are real, modern-technological advances, or if they run on magic, so I am still not sure what time period to categorize this book in, because they definitely do not have cars, telephones, or the like… However, after I got into the book, I became accustomed to this juxtaposition of medieval and modern, and it actually enhanced the story to provide a further layer of mystery and magic on my own reading experience.

The thing that kept bringing me in, again and again, so that I could scarcely put the book down before picking it right back up after a few minutes (definitely decreased my productivity on important matters, like oh, I dunno, grad school homework!) was the character building. I absolutely loved the characters in this book, and not only Rena and Bannen, though they were admittedly my favorite, probably in part because the story alternated between their first-person POVs. Bannen is an overprotective gentleman and a fighter to the core. Rena is an ambitious, bright, and occasionally shy mage-to-be, who has the potential to become something amazing. Tarkington plays the part of an overbearing father, but really is a sweetheart on the inside, while Vonda plays his perfect double. Each character, no matter how small their influence in the novel, had such a unique set of character traits and humor/dialogue that I found this novel absolutely fascinating. Not to mention Bannen/Rena’s wit! I literally found myself laughing, out loud, while reading this novel. So be forewarned, you may want to read it in a more private area than a coffee shop, or people may start to look at you funny… Hypothetically of course, nothing like that happened to me…

“Because I’m dangerous?” Bannen gave her a wink.

“And sexy,” she purred, winking back.

He laughed in delight. “I’m glad I get to go as well. I heartily dislike leaving all of you to the fun parts of the job without me.”

“You mean dangerous,” I corrected him dryly.

With the amazing characterizations of the characters, my emotions were fully invested in the story. And there was quite a range of emotions that I went through! I laughed (obviously, see above), I teared up, I became frustrated with a character (mirroring the M.C.s), and even found myself yelling at them at one point. As if they could hear me all the way here on Earth. I’d need Tarkington to set me up with a communication spell first! Really, though. This book was amazing. It completely stole my mind away from wherever and whatever I was doing in real life, and transported me to this magical world where I felt the stakes. I was inspired to enact change in the Mage Council, and was even drafting up arguments/protests in my head! That’s how invested I was in this book.

So, I’ve talked a lot about characters and dialogue and setting, but what about plot? Well, lemme tell you, the plot was SO GOOD. Can you tell I love this book? I love this book. So not only does our heroine and her sidekick follow the traditional fantasy arc of meeting, building up to the climax of a problem, and finally the resolution of that problem, but the story continues even after that. I thought the book was about to end, but then looked down and saw I still had 25% left! Gotta admit, I may have jumped up and down a little bit. Even after the main obstacle in our protagonists’ way is overcome (either positively or negatively, I will not spoil!), we still get to follow our characters (because yes, they are now ours–the readers’–no longer the author’s. I especially claim ownership! I want them in my life!) into another climax and resolution. And this is the one that really tugs on our heartstrings. I love it.

The novel ends on somewhat of a cliffhanger, or perhaps just more a feeling of adventure-yet-to-come. Since this is part of a series, Familiar and Mage, you can bet your bottom dollar (and more!) that I will be getting the next book ASAP. I cannot wait to continue this journey!