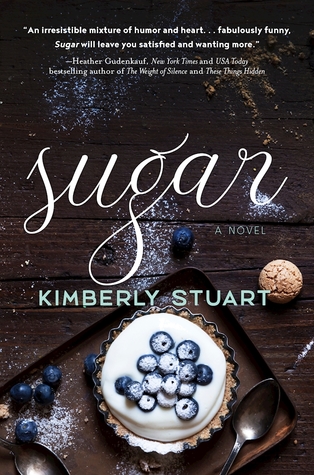 After realizing her coworkers at L’Ombre, a high-profile restaurant in NYC, will never appreciate or respect her, Charlie Garrett allows her ex-boyfriend, Avery Michaels, to convince her to work for him as executive pastry chef at his new Seattle hotspot, Thrill. She’ll have her own kitchen, her own staff—everything she ever wanted professionally.

When she arrives at Thrill, however, she realizes that Avery wanted more than a pastry chef for his restaurant—he wanted a costar for the reality show they’re filming about the restaurant and its staff. Charlie is uncomfortable with the idea at first, but she soon realizes that this is her chance to show the world what women in the kitchen are capable of. She sets some ground rules with the film crew, signs a non-disclosure agreement, and promptly meets the man of her dreams, Kai, off-camera.

The show, and her demanding work schedule as head of the pastry kitchen, makes it nearly impossible for Charlie and Kai to spend time together. Drama on and off the set soon take a toll on Charlie’s well-being, forcing her to choose if life in front of the camera is worth sacrificing life behind the scenes.

So, we are introduced to this fine-dining Chef Charlie, who seems to have a lot of weird little quirks… I love it! Maybe a neat-freak/a bit of OCD. She likes to exercise, has no social life… This girl sounds great! She’s doesn’t seem to be the normal beautiful-but-she-doesn’t -know-it, her-life-has-no-meaning-without-a-man protagonist that seems to star in most romances. She feels more real to me. Someone I could actually befriend and get to know.

I also really like this character of Manda, even though we only get a very quick snapshot of her on the phone. I hope that we learn more about her!

So, Charlie’s job seems like it sucks. What is she going to do about it? Simmer in silence? Make a bold move? I want to know! I hope she does something to this Felix fellow, he is downright annoying. I am ready to move on to the next chapters! Let’s see what happens, shall we?

In this contemporary romance, we follow the exciting life of neurotic chef Charlie Garrett. Stuck in the same job for the last several years with a cruel boss and empty promises of greatness, Charlie lucks out on a job offer from her ex-boyfriend, Avery. Little does she know, after moving cross-country from New York to Seattle, that this normal job as a chef at a high-end restaurant is also a TV gig. Is she able to juggle her newfound romance with Kai–a cook at a lovely local diner–with her chef duties and TV stardom? Or will it all unravel in her hands?

Linoleum-clad kitchens in Minnesota, galley kitchens in New York, commercial kitchens in Seattle, Architectural Digest kitchens in the homes of celebrities–I’d tried them all. And, I thought, as I moved toward the ovens and my crates of supplies, I knew how to make them obey me (Loc 2355).

I do not have much experience in the romance novel (mostly fantasy with a romantic twist), so much of what I know of romance comes from Rom-Com movies. The biggest thing that I enjoyed about this novel was that it was not a stereotypical romance (at least, not the kind of romance movie). It was more about the story of this independent, ambitious woman making her way to the top in a man’s occupation, with a romantic twist on the side. With this kind of foundation to build a romance upon, I loved that it was not cheesy or too rushed or simply a love-at-first-sight trope. In fact, the relationship between Charlie and Kai seemed very natural and something that I could see happening with one of my own friends at this very moment (if she were also a famous chef and starring on a TV show…)! With this authenticity of romance and the strong female MC, Kimberly Stuart allowed the story to completely unfold flawlessly in my imagination. Everything seemed to happen just as it should.

His kiss, I was pleased to note, was a lot like his chocolate cake. Sweet with a little sass, and absolutely the best reason I’d ever had to shut up (Loc 1376).

In addition to Charlies’s integral role (as well as her entertainingly weird idiosyncrasies), I also loved the fact that Stuart included other strong and dynamic characters of various ages as well! Zara, though a very minor character, added such a wholesome vibe to the book that I could not get enough of this little girl! Normally, I dislike children in books because they tend to be awkwardly portrayed, the author unsure of how a child of that age actually talks and acts. But Stuart absolutely nailed it! Same with Manda, Charlie’s best friend. She had me literally laughing out loud at her parenting commentary! Her and Zara together were quite the pair! And the obvious kinship between Manda and Charlie, their years of bestfriend-hood pulsing through their every interaction, revealed subtle intricacies in Charlie that I would have otherwise missed. Even Kai, the love interest was round! I loved getting to see where he grew up and his two sisters.

Jack met us on the front walk, where he was gathering leaves into a pile. “Go get ’em, Char.” He punched me lightly on the arm, “We’ll all watch to make sure you don’t run and that you feel as uncomfortable as possible during your private moment.” He grinned at my scowl (Loc 3652).

Even the flat characters, such as Avery, Felix, Tova, Jack, and Margot, enhanced the story at least five-fold. Every single one had a rich backstory, complex emotions, and plot-building moments. Seriously, the character-building in this novel is simply a masterpiece.

I was also enthralled with the absolute detail involved with the cooking aspect! Now, I am definitely no chef, but I feel as if I could have made some of those pastries simply from reading the novel. It was as if I was actually behind the scenes, in the kitchen with Charlie. I never knew how a fine-dining restaurant worked, but now I do!

Overall, the plot was fantastic, the romance was natural, the characters were strong and feminist (always a plus!), and I oscillated between laughing my butt off and nervously turning pages awaiting to see what would happen with Charlie and her job/love life. I think it is safe to say that both die-hard romance readers as well as the non-romance readers would enjoy this novel!

What romance novels have piqued your fancy? I want to read more! But I have nowhere to start… Any Fantasy-Romance combos that you guys are aware of?? Leave titles in the comments below!

The Book Dragon has
read 21 books toward
her goal of
100 books.
hide