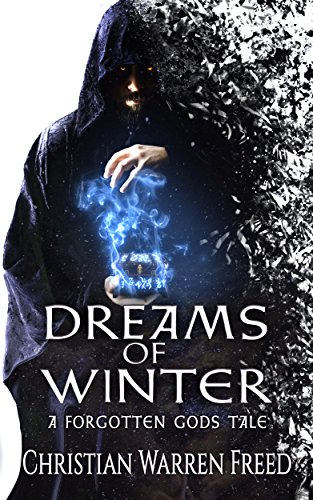 It is a troubled time, for the old gods are returning and they want the universe back…

Under the rigid guidance of the Conclave, the seven hundred known worlds carve out a new empire with the compassion and wisdom the gods once offered. But a terrible secret, known only to the most powerful, threatens to undo three millennia of progress. The gods are not dead at all. They merely sleep. And they are being hunted.

Senior Inquisitor Tolde Breed is sent to the planet Crimeat to investigate the escape of one of the deadliest beings in the history of the universe: Amongeratix, one of the fabled THREE, sons of the god-king. Tolde arrives on a world where heresy breeds insurrection and war is only a matter of time. Aided by Sister Abigail of the Order of Blood Witches, and a company of Prekhauten Guards, Tolde hurries to find Amongeratix and return him to Conclave custody before he can restart his reign of terror.

What he doesn’t know is that the Three are already operating on Crimeat.

In this sci-fi crossed with fantasy, the universe is in trouble. The Gods have abandoned the humans after destroying each other in a fight that obliterated an entire planet. Now, they slumber within each of their own worlds, and it seems as if humans may be able to thrive without the Gods. But that all changes when one of the Three, the sons of the Gods, is broken out of prison. Now, each of the Three, whom many think are only myths, are free on the planet Crimeat. They have the power to destroy that world, and even the universe. Will the Conclave and Inquisition be able to stop them before it’s too late?

As soon as you open this novel, you are in a completely different universe. There are unique planets with their own governing systems and use of technology, not to mention the many different races of beings. I found the planet of Crimeat–where almost the entire story takes place–to be quite endearing. Even with access to advanced technology such as flying cars, ion guns, and the like, most of its inhabitants still preferred to keep life simple with horses for travel. It gave the story a very unique feel–both nostalgic AND futuristic simultaneously; the best of both worlds.

With the amount of detail given into the backstories of the different planets and races, there is a lot of information simply thrown at the reader in the beginning of the novel. At first, it was very difficult for me to remember names (of people, places, governing systems, etc.) and I could not quite get into the story itself as I was busy figuring out who was who and what their motivations were. I would count it as a pro that there are many different POVs and “main” characters in the story, but it did take some getting used to. It also made the plot itself a bit hard to decipher, as I couldn’t remember which character had power in which city or over which other characters. However, around the middle of the novel, I became much more familiar with the characters, and I was able to dive more deeply into the storyline itself.

Going along with this, I wish there was a map of the different planets, either in connection with each other, or of each individual planet’s layout. This would have made the story so much easier to follow along with, especially in the beginning, when we were hopping onto different planets to meet new characters.

Even with my confusion in the beginning of the novel, the writing kept me engaged. The writing style is absolutely beautiful, and made me want to keep reading, even when I had no idea what was going on, or which character I was reading about. The writing makes the story and its characters real. They’re not just people that I’m reading about; they’re true fighters that are hanging onto their last hope. It makes the story compelling and a pleasure to read.

Overall, I believe that this novel will grab sci-fi enthusiasts immediately. Those used to juggling different races, planets, and characters will love this story from the get-go. For the readers who are not as familiar with the sci-fi genre, this is still a good read if you can keep up for the first half. The second half of the novel is where things truly start to hit the fan, and I was racing the characters to the end.

Follow The Book Dragon on WordPress.com
Join 468 other followers